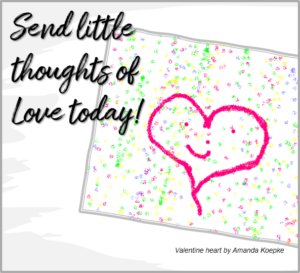 Walking through the grocery store, it's impossible to ignore the displays of Valentine's candy, cards and gifts. Some historians believe Valentine's Day started as an ancient Roman celebration of the coming of spring.  Others tie it to Saint Valentine, who was executed for performing marriages of young men that a Roman emperor had outlawed to keep a steady supply of soldiers.

While the origins of Valentine's Day is a bit murky, the key is that centuries later, the tradition of sending Valentines is second only to Christmas.  According to the Greeting Card Association, an estimated 145 million Valentine’s Day cards are sent each year, making Valentine’s Day the second largest card-sending holiday of the year.*

There are two things that I choose to embrace about the holiday. First, it's about sending out thoughts of love - especially to family and friends to let them know I care.  Second, it is an easy way to uplift someone with a simple gesture. Hopefully, you enjoy receiving the same in return.

Will your valentines - little thoughts of love - be in the mail this week?

Isn't it fun to think of Valentine's Day as one where a simple gesture, a card or e-card makes someone feel loved? Here are some great ways to share it this week: